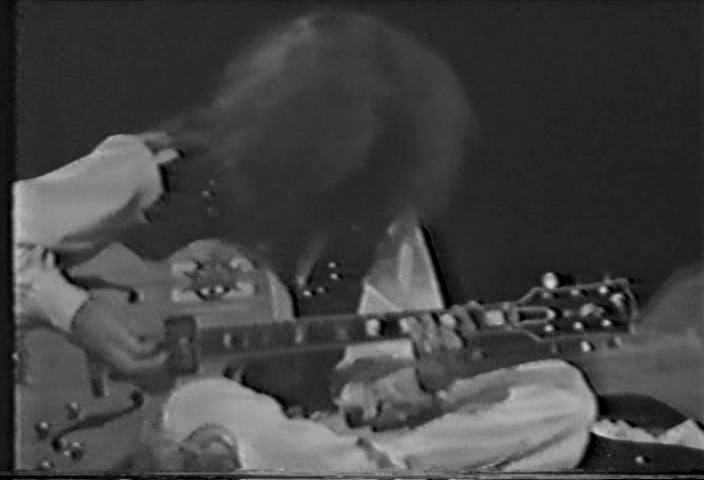 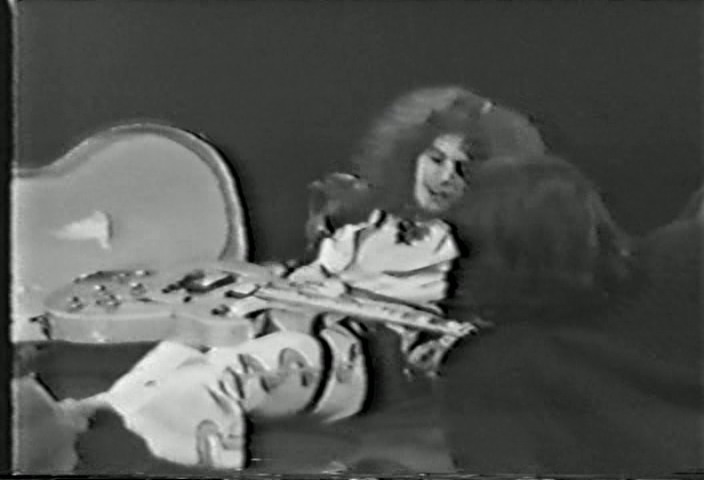 This is a very, very historic "period piece" type video. It was filmed at Wayne State University TV Studio, in Detroit and the host's name is Dave.

The person from whom I received this video says it's "Detroit Tube Works 1971." I cannot find a single reference for this program on the net, however.

The setting is a small tv studio (probably a public television studio) with Ted and the host sitting on the floor of small stage. Ted has several guitars laying around - all of them are Gibson Birdlands. It's very layed back, and I doubt that there was any script for this as Ted just chats about whatever and occasionally does some jamming on one of his guitars. Ted literally starts off the video laying on his back and playing guitar for several minutes. The host seems to know a little bit about rock and roll, but he's hardly an expert. The host puffs away on cigarettes most of the show. A sign of the times - Ted said the word "shit" and the host told him he had to watch his language because they were on tv. Although he looks quite normal by modern standards, at the time, much of society looked upon Ted as a long-haired freak.

There's some banter with the people in the control room who are really getting a good laugh from the discussion going on between Ted and the host.

Ted makes some "local" Detroit references to many things, such as Michigan Outdoors host Mort Neff (an outdoors/hunting show in Michigan), the Purple Pickle restaurant on Southfield Rd. and Nine Mile, and many local musicians.

Although he shows signs of it, Ted hasn't yet become the cocky mofo that he is today.

There are logical chapter points throughout the video, some of them are for the various guitar jams, and others are placed at the beginning of certain conversations.

The video cuts before reaching the end - I was told the full video doesn't exist. I don't know how long the original video was, but this portion is 46 minutes long. It was filmed in black & white and considering the age and rarity of the video - it is in decent condition. Generally speaking the video is clear and glitch free, however, there are about a dozen or so tape rolls in it.